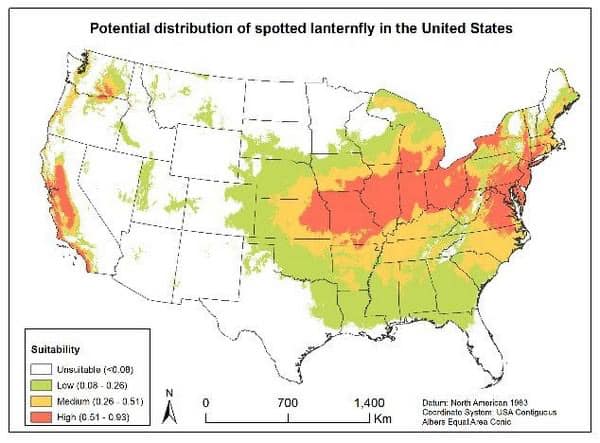 More Why? The Spotted Lanternfly is a invasive species from planthopper native to China, India, Vietnam. It was first discovered in Pennsylvania in Berks County and has spread to other counties in the southeast portion of the Commonwealth. This insect has the potential to greatly impact agricultural crops such as grapes, hops, and hardwoods. It is also reducing the quality of life for people living in heavily infested areas. Lanternflies decimate crops including almonds, apples, blueberries, cherries, peaches, grapes and hops as well as trees such as oak, walnut and poplar, among others, according to USDA. They destroy plants and trees by feeding on the sap.

Pennsylvania is currently spraying and trying to control the spread but currently they are reporting 14 counties are invested and spreading. Whats worse is the Ohio, Indiana and Illinois are the perfect climates for these insects to take ahold and breed more.

The only hope that we will in the next several years start seeing the invading bug is if Pennsylvania figures out how to control them. The State is already working on ways to give addition control even possibilities of releasing other insects that prey on the lantern files, according to Pennsylvania’s natural resources.

Update: Insect experts are saying to plant milkweed, because the insect does not know the plant is poisonous to it, it drinks the nectar and kills them. Milkweed is also great for the Monarch Butterfly.

Ohio has not received any confirmed reports of the bug in the state yet, but they are in bordering counties with Pennsylvania.