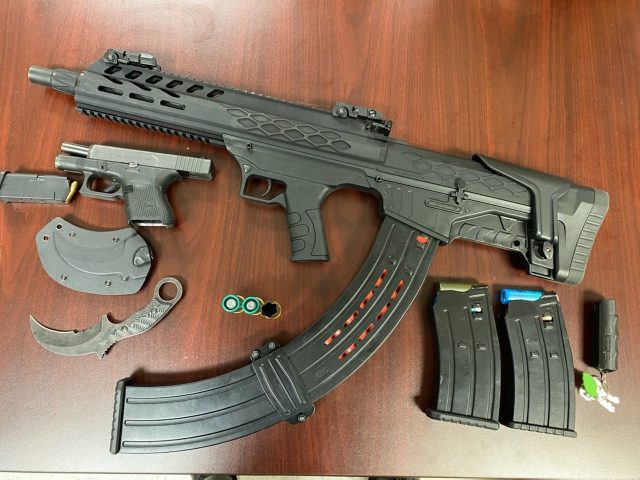 JACKSON – A man high on drugs with access to firearms ended in arrest on Friday night.

According to the Jackson Sheriffs office deputies arrived at State Route 93, Wellston on Friday night after a caller advised that 37-year-old Aaron Jones was under the influence of methamphetamine, had a gun and was shooting it.

Once arriving at the residence, deputies spoke to a woman who said that Jones had been acting very erratic and had become angry when she refused to give him the keys to her car. She advised that Jones had been outside shooting in to the air with the shotgun he had left in the living room. Deputies recovered the shotgun, which had a high capacity magazine still in the weapon .Once deputies were able to detain Jones, they found a Glock 9mm handgun on his right-side. During a search of his person, deputies also discovered a large knife in his back pocket and a magazine for a semi-automatic 12 gauge. Deputies reported that a small button baggie with a white residue was located in his pocket.

While detained, Jones had to be tased because he was trying to kick doors open; he kicked and banged his head so hard that he bent the inside cage of a cruiser. Deputies also reported that Jones spit in one of their faces. Once he arrived at the Jackson County Correctional Facility, Jones became combative. Deputies were then tasked to take Jones to the Holzer Emergency Room for evaluation so he could be medically cleared to be placed in jail.

While seeking evaluation at the hospital, Jones continued to resist and attempt to break free from his restraints for over an hour and a half, before medication was able to calm him. He was later taken to Grant Medical Center for a brain bleed.

The case will be forwarded to the Jackson County Prosecutor’s Office for review of possible charges of vandalism, using weapons while intoxicated, resisting arrest, assault and obstructing official business.