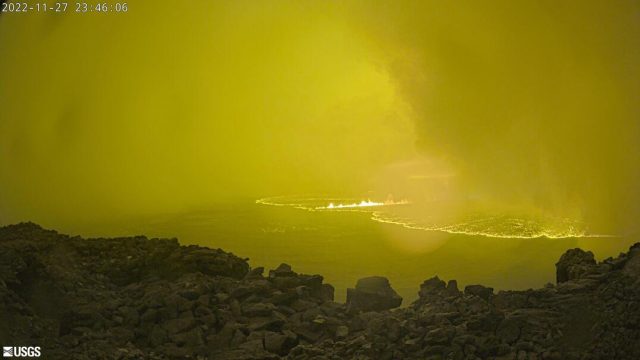 The largest active volcano in the world, Mauna Loa volcano hasn’t erupted since 1984.

“At approximately 11:30 p.m. HST this evening, November 27, an eruption began in Moku‘āweoweo, the summit caldera of Mauna Loa, inside Hawai‘i Volcanoes National Park. At this time, lava flows are contained within the summit area and are not threatening downslope communities. Winds may carry volcanic gas and possibly fine ash and Pele’s hair downwind.

“Based on past events, the early stages of a Mauna Loa eruption can be very dynamic, and the location and advance of lava flows can change rapidly,” the observatory said, adding that nearby residents “should review preparedness.”

According to the U.S. Geological Survey, at least 25 earthquakes ranging in magnitude from 2.5 to 4.2 occurred in the area before the eruption.

“Mauna Loa eruptions tend to happen fast after slow buildups. The past couple of years have seen the buildup — with increased seismicity and inflation. That’s what motivated HVO to do a series of public outreach events over the past several months. Once it decides it’s ready, there is about an hour of seismicity and deformation as magma moves from the reservoir to the surface. That tipping point, from slow buildup, to magma moving toward the surface, is difficult to forecast,” said the USGS Volcanoes experts.