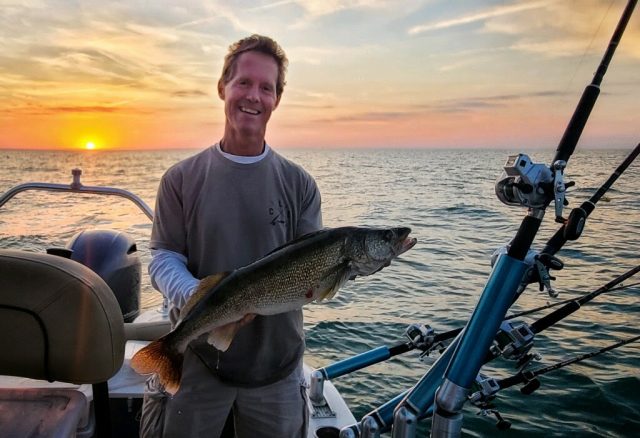 COLUMBUS, Ohio – Fishing for Lake Erie walleye has never been more exciting thanks to several exceptional years of fish production in the western basin. This summer, the Ohio Department of Natural Resources (ODNR) Division of Wildlife trawl surveys found that there will be another walleye hatch that is well above average. 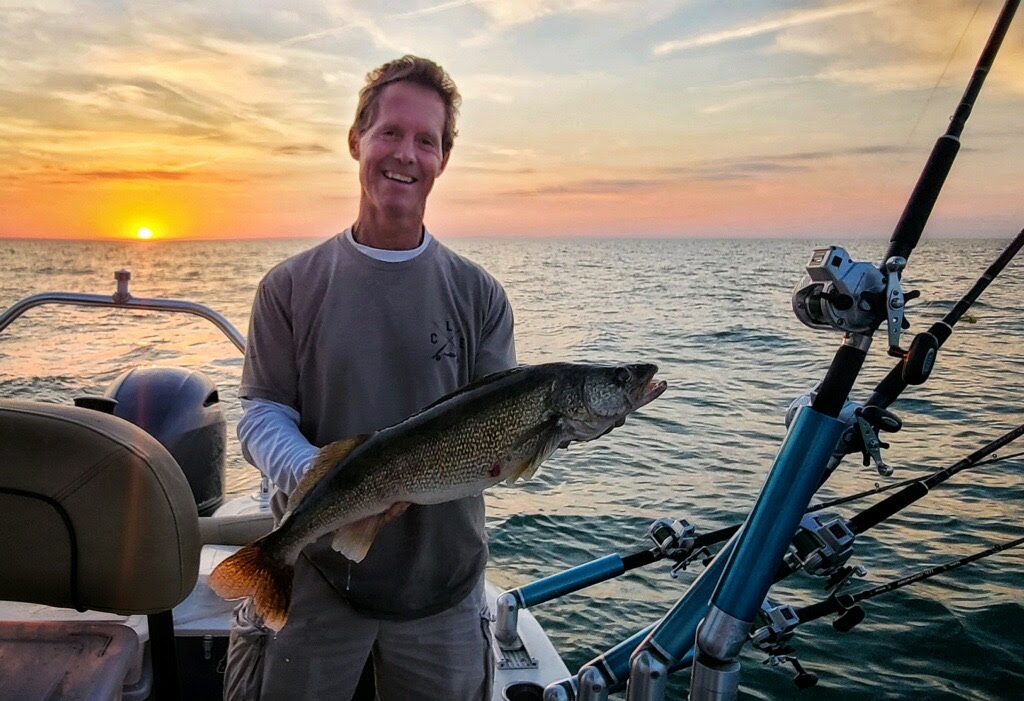 In research presented to the Ohio Wildlife Council during its regularly scheduled meeting on Wednesday, Sept. 8, fisheries biologists reported the 2021 walleye hatch was the fifth largest recorded over the past 35 years.

“This is fantastic news for Lake Erie walleye and the future of the fishery,” said Division of Wildlife Chief Kendra Wecker. “This hatch will reach harvestable size during the 2023 fishing season. In the meantime, with an incredible run of strong hatches beginning in 2015 there has never been a better time to fish Lake Erie. Anglers can find an abundance of walleye averaging 20 inches, reaching up to 26 inches or more.”

The 2021 walleye hatch index was 90 fish per hectare (a standard measure of area), well above the rapidly increasing prior 20-year average of 34 fish per hectare. The young walleye averaged just over 4 inches long and were caught at every site sampled. 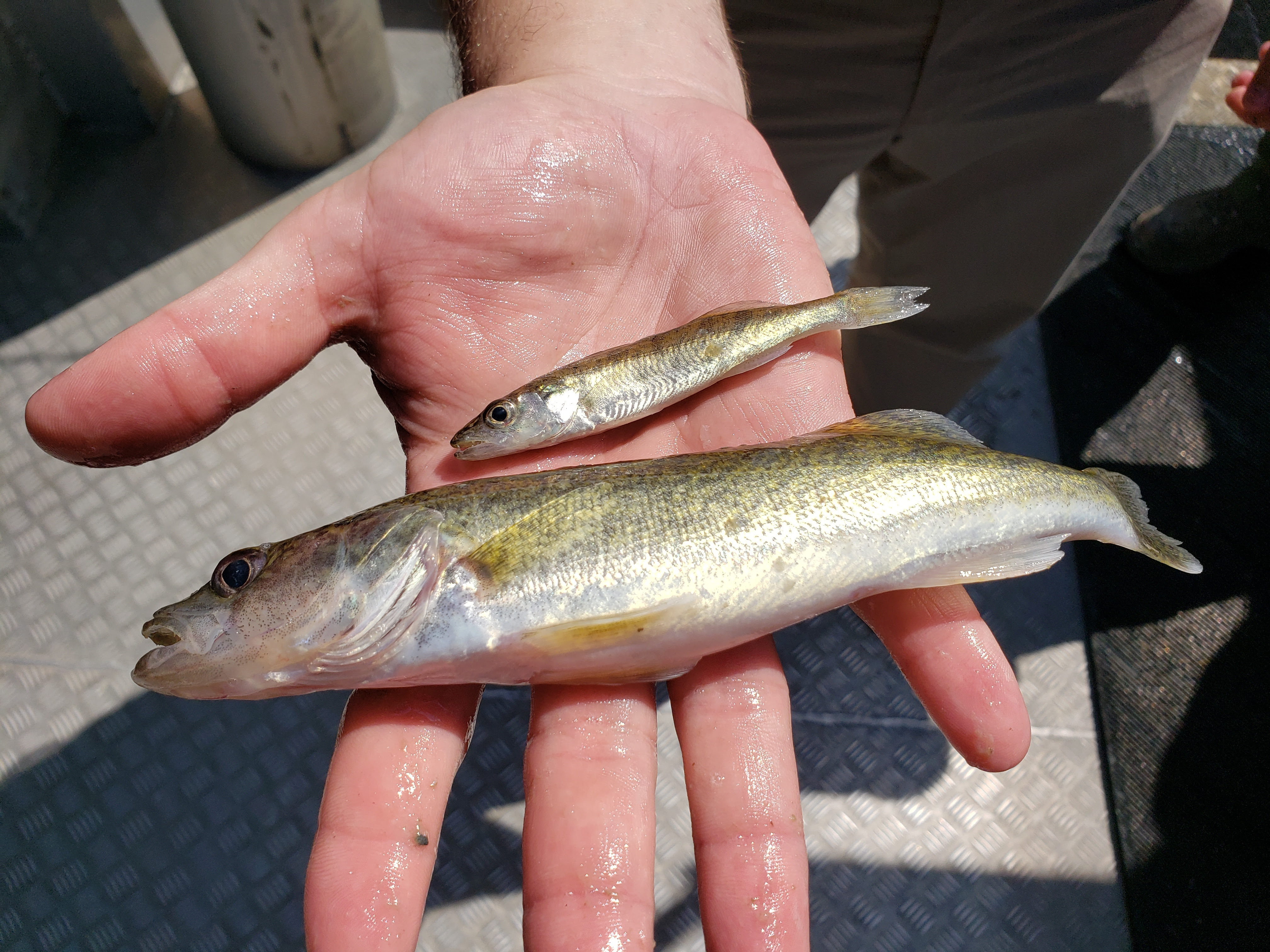 Caption: A Division of Wildlife fisheries biologist holds two trawl-caught walleye during the August survey. The top fish is about 4 inches long and was hatched in the spring. The bottom fish is about 18 months old and 8 inches long.

“Our fisheries biologists survey nearly 40 locations between Toledo and Huron by dragging a large, concave net along the bottom of the lake,” said Division of Wildlife Lake Erie Fisheries Program Manager Travis Hartman. “Smaller first- and second- year fish tend to feed near the lake’s floor and are captured in the net, while larger fully-grown fish dodge the net and are not routinely caught.”

Lake Erie is managed cooperatively by the five states and provinces that border it: New York, Pennsylvania, Michigan, Ohio, and Ontario, Canada. Each August, Ohio’s fisheries biologists contribute to lake-wide efforts to survey hatch success in Lake Erie’s western basin. Ohio’s results are combined with surveys from the other bordering states to estimate the total walleye population in the lake. This estimate is then used to establish fishing regulations and daily limits.

Combined survey results over the last several years show that the Lake Erie walleye population is on the rise. Angler catch rates are near one fish per hour, proving now is a great time to get out and pursue this fan favorite fish.

Additionally,  trophy sized walleye are increasing. A Lake Erie walleye 28 inches or longer qualifies for recognition from the Fish Ohio program. Records show that Lake Erie walleye entries have increased every year since 2017, culminating in 1,901 submissions in 2020. So far in 2021, more than 1,100 walleye entries have been submitted. More information can be found on the Fishing Lake Erie page at wildohio.gov.

Yellow perch survey results for both the western and central basins will be announced later this fall by the Division of Wildlife after completion of Ohio’s central basin trawl survey in September and October.

Want to stay current on everything wildlife? Connect with the Division of Wildlife by downloading the HuntFish OH mobile app, or check us out on Twitter and Facebook for instant news stories, outdoor recreation ideas, local wildlife information, and so much more. The Your Wild Ohio Angler Page provides fishing tips and useful information as you plan to get outside this season. Share your next fishing adventure with #fishohio.


The mission of the Division of Wildlife is to conserve and improve fish and wildlife resources and their habitats for sustainable use and appreciation by all. Visit wildohio.gov to find out more.