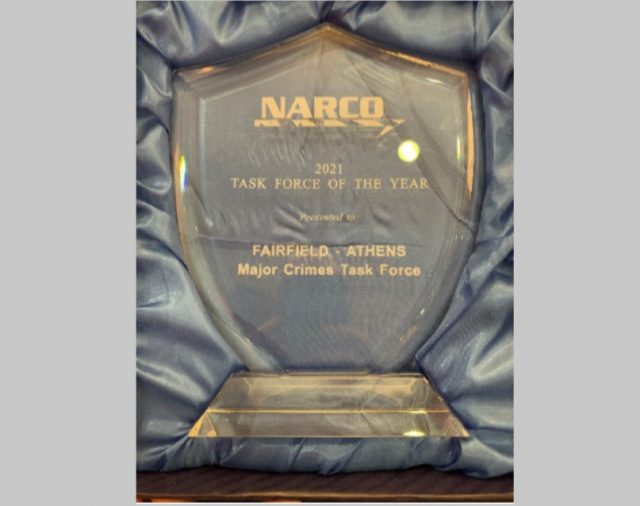 On Wednesday, September 15, 2021, the Fairfield-Athens-Pickaway Major Crimes was selected as the Ohio Drug Task Force of the year by the Ohio Narcotics Association of Regional Coordinating Officers ( Ohio NARCO).

The task force was recognized for their exceptional collaboration, and drug enforcement efforts which included investigations at both the state and federal level.  Just one of those investigations resulted in the seizure of more than five pounds of Fentanyl, fifteen pounds of heroin, fifty pounds of methamphetamine, twenty-eight firearms and the recovery of more than $1,000,000 in stolen vehicles. The Major Crimes Unit was also noted for their innovation and fidelity to community outreach through Project FORTproviding expedited access to treatment and recovery services to those with substance use disorders outside of the criminal justice system.

Major Crimes Unit Commander Dennis Lowe said that “The entire team is incredibly humbled and honored to be selected as the Ohio Task Force of the Year.”  “The men and women of the Major Crimes Unit are dedicated professionals who work tirelessly to address issues impacting the community involving drug trafficking and substance use.” Commander Lowe went on to say that” This award and the work that led up to it would not be possible without the incredible level of collaboration, trust and support of the agencies who participate in the task force.”