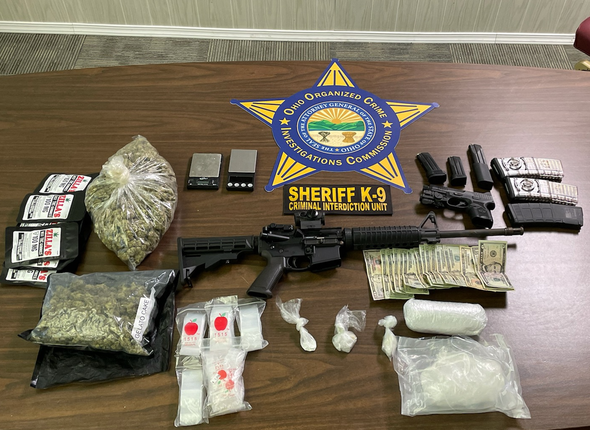 The notable one-year increase in seizure amounts is attributable to the addition of an OOCIC task force, the expansion of other OOCIC task forces, increased levels of drug trafficking in Ohio, and the culmination of long-term investigations. Also in 2021, OOCIC task forces seized 7,906 opioid pain pills and 1,205 other prescription pain pills.

“The law enforcement officers of our major drug interdiction task forces are guardians on the wall, protecting Ohioans from overdoses and death by seizing narcotics before they are distributed into our communities,” Yost said. “Substantially larger quantities of heroin, fentanyl and methamphetamine were interdicted in 2021 than prior years, proof of our task forces’ vigilance to stay ahead of drug traffickers. I look forward to OOCIC’s continued success in 2022.”

The task forces, formed through partnerships with Homeland Security Investigations and local law enforcement agencies statewide, are funded through RecoveryOhio, in concert with the Ohio Department of Public Safety and Ohio Criminal Justice Services.

“The continued success of the task forces this past year can directly be attributed to the tireless efforts of police officers and special agents working together to arrest and prosecute those who seek to profit on the addictions of others,” Vance Callender, special agent in charge of Homeland Security Investigations (HSI) Detroit Field Office said,  “HSI brings national and international resources to Ohio law enforcement so not only local dealers are arrested, but the leader/organizers who are the source of supply for local criminal networks and across the U.S.  We want to ensure the broadest impact is brought to those who ultimately profit from these international conspiracies.”

The strength of the task forces stems from the multi-level involvement. Aided by federal intelligence, local agencies operating under OOCIC’s jurisdiction carry out drug interdictions to remove illegal narcotics from Ohio communities.

In April, the Hamilton County task force made four major seizures of narcotics destined for southwest Ohio from California. The seizures included more than 5 pounds of heroin and 43 pounds of methamphetamine.

In November, at the conclusion of an investigation that culminated in the felony federal indictment of four people, the task force seized 25 pounds of fentanyl, 1.2 pounds of cocaine, 38 pounds of marijuana, 13 firearms and $43,701.

In June, CODE seized 2,350 grams of methamphetamine and 2,718 counterfeit Oxycodone pills found to contain fentanyl. The seizure led to the arrest of two Licking County men.

In September, ONSET seized 13 kilograms of cocaine and a loaded handgun from subjects involved with a vehicle of interest that had ties to the Southwest border.

In March, during the arrest of a Bellaire man, the task force seized 9 pounds of methamphetamine, 6 ounces of cocaine, $3,861 and a loaded firearm.

In October, in executing multiple search warrants, the task force confiscated over 1 pound of methamphetamine and other narcotics, along with paraphernalia and packaging for distribution.

In November, the task force identified an individual suspected of narcotics trafficking in Montgomery County, subsequently seizing 10 kilograms of cocaine and 1 pound of marijuana.

In December, the task force arrested Jose Noriega-Rodriquez of Sinaloa, Mexico, on charges of narcotics trafficking. Throughout their investigation, detectives seized 10 kilograms of fentanyl, 2 kilograms of cocaine, 1 kilogram of heroin, 336 grams of methamphetamine, 4 pounds of marijuana and about $150,000.

The task force includes the sheriff’s offices in Montgomery and Clark counties, the police departments in Miami and Butler townships, the Montgomery County Prosecutor’s Office, the Ohio Bureau of Criminal Investigation (BCI), the State Highway Patrol and Homeland Security Investigations.

In February, an investigation conducted by the task force disrupted a complex trafficking scheme between Columbus and Las Vegas, Nevada which led to the indictment of three individuals on federal charges for the distribution of cocaine. The co-conspirators used short-term residential rentals in Columbus and other east coast cities as mailing locations to import smuggled cocaine from Mexico. After the narcotics were sold to local drug dealers, the cash proceeds were sent back to the Las Vegas. Nationally, the group shipped and distributed over one hundred kilograms of cocaine and over $1,000,000.

In April, the task force worked with the Toledo Police Gang Unit and the Toledo Police SWAT Unit to execute a search warrant related to drug trafficking that originated in California. Suspect Brandon Moore was arrested and charged with multiple trafficking-related felonies and weapons charges after more than 20 pounds of marijuana, other drugs, a loaded pistol and $48,000 were seized.