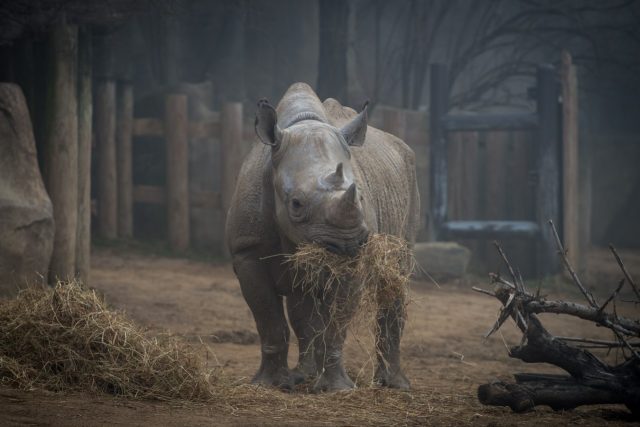 Powell, OH— The Columbus Zoo and Aquarium is mourning the loss of Rosie, an eastern black rhinoceros, whose health had recently declined.

With her advanced age, Rosie had developed several geriatric problems like hypertension and arthritis. She was a model patient, cooperating with her Animal Care team and Animal Health staff for voluntary blood pressure measurements and frequent blood collections while being medically managed. Due to her rapidly declining condition, she was humanely euthanized this morning, surrounded by her devoted care team.

Rosie was born at the San Francisco Zoo on January 6, 1990, and arrived at the Columbus Zoo on November 12, 2009 from Zoo Atlanta through the Association of Zoos and Aquariums’ (AZA) Species Survival Plan® (SSP) program. At 30 (almost 31) years old, Rosie exceeded the median life expectancy (19 years) of black rhinos living in AZA-accredited zoos by over a decade.

Rosie was beloved by her care team, as well as our supportive community. Rosie’s care team says she loved human interaction. Throughout the years, Rosie gained many fans, who often had the opportunity to treat her to apples—her favorite snack—during special encounters. Rosie was also known for her artistic skills, which she applied to the paintings she created using her prehensile upper lip. These unique masterpieces provided her with enrichment and helped benefit the Zoo’s animal enrichment program.

While Rosie did not produce any calves, she contributed to important research for rhino reproduction, and she shared a close bond with her care team. Regular training led to shared trust between Rosie and the keepers, which was essential in her care. She voluntarily participated in blood collection, x-rays and even having her teeth brushed.

As black rhinos are solitary by nature, Rosie was the only rhino at the Columbus Zoo. Future plans for the habitat will be shared once more information is known.

“The loss of any animal is hard, but Rosie’s passing weighs especially heavy on our hearts today as she was special to many. I can’t imagine anyone not experiencing an emotional connection with Rosie when they saw her up close. Those experiences were instrumental in leading people to care and get involved with rhino conservation. She was an incredible animal and a wonderful ambassador for rhinos, which face many threats in their native range. She lived a very long life, thanks to the expert care she received, and though we will miss her dearly, her legacy will continue to inspire our work in saving wildlife and wild places,” said Columbus Zoo President/CEO Tom Stalf.

Black rhinos are found from Kenya to South Africa. Almost 98 percent of the total black rhino population is found in four countries: South Africa, Namibia, Zimbabwe and Kenya. Currently, there are estimated to be approximately 5,000 black rhinos remaining in their native range.

The International Union for Conservation of Nature and Natural Resources (IUCN) lists the black rhino (Diceros bicornis) as critically endangered. Unfortunately, large-scale poaching reportedly caused a dramatic 98 percent population collapse in less than 40 years – the greatest rate of decline estimated among all rhino species. Adding to the tragedy is that poaching is fueled by a misconception that a rhino horn carries medicinal benefits when, in fact, it is composed mostly of keratin, which is commonly found in hair or fingernails.

However, there have been signs of hope for the future of rhinos. The IUCN reports that countries where investments in conservation programming have been made – including monitoring and law enforcement – have shown increases in black rhino populations. The Columbus Zoo has been a proud supporter of such programs. In the past five years, the Zoo has donated more than $220,000 to rhino conservation projects, including providing support to the International Rhino Foundation. As an accredited member of the Association of Zoos and Aquariums (AZA), the Columbus Zoo is also an active participant in the AZA’s Saving Animals From Extinction (SAFE) program for black rhinos.