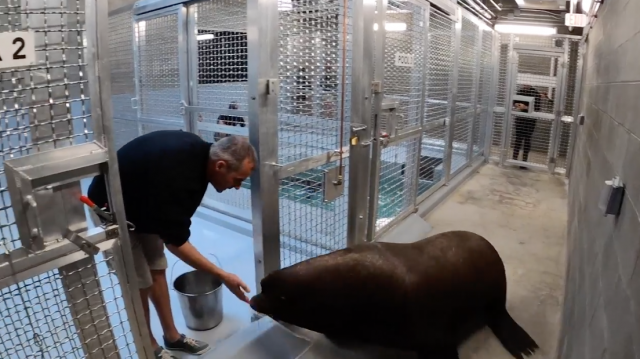 Powell, Ohio – The Columbus Zoo and Aquarium is proud to announce the arrival of 10 California sea lions and four harbor seals in another milestone marking that the Zoo’s newest region, Adventure Cove, is edging toward completion.

Accompanied by Columbus Zoo staff and a marine mammal veterinarian, the seals and sea lions traveled from Florida and safely arrived at the Zoo on Sunday, May 17, 2020 at approximately 6:20 a.m. The seals (one male, three females) and sea lions (six males, four females) are settling in well in a behind-the-scenes area of the facility, where they will have the opportunity to begin exploring their new surroundings as final phases of adjacent areas of the Adventure Cove region are completed.

Thanks to the support of voters who passed the last levy and contributions from generous donors, the Columbus Zoo began construction in October 2017 on this brand-new, state-of-the-art region, which will feature a Pacific Northwest inspired rocky coast and harbor setting for the sea lions and seals; Jack Hanna’s Animal Encounters Village, a colorfully-themed and immersive village highlighting animals from all around the world; and updated existing attractions.

While a specific date has not yet been set and the Zoo remains closed to the public to help reduce the spread of coronavirus (COVID-19) within the community, Adventure Cove is on target to open in summer 2020.

“Adventure Cove has been many years in the making, and we are grateful for our community’s support in helping to make this dream a reality. Even during this incredibly challenging time as we’re all impacted by the effects of a global pandemic, I am reminded how much our community continues to come together as we focus on the future. Adventure Cove is truly going to exemplify our organization’s mission to lead and inspire by connecting people and wildlife. The region is being constructed so that it offers multiple opportunities to experience unique interactions with a variety of animals to learn more about them and be inspired to take away a call to action so that we can all do our part to help protect these species. We are looking forward to being able to share Adventure Cove with our guests, and I am proud how the region will continue to encourage that important message of connections—together with all of us and with wildlife across the globe,” said Columbus Zoo and Aquarium President/CEO Tom Stalf.

As with the Zoo’s other newest regions such as Polar Frontier and Heart of Africa, Adventure Cove has been designed with the same spaciousness and naturalistic, mixed-species settings in mind. The harbor seals were born at SeaWorld Orlando and will live with the sea lions, as these species would encounter one another in their native ranges. Three of the sea lions were also born at SeaWorld Orlando and have been introduced to the others to expand the group, as sea lions are highly social.

Although the other six sea lions were born at different facilities all over the world, they have lived together for about 10 years at a marine park in Shanghai, China called Changfeng Ocean World. The park was looking for the best possible new home for their sea lions and chose the Columbus Zoo. The animals’ social structure is a very important consideration for their wellbeing, and the Columbus Zoo and Aquarium is in the unique position of both planning a new sea lion habitat and having the capacity to keep all of the animals together to preserve their social structure. Two of the sea lions who arrived from China also bred, resulting in one male pup born in 2018. The sea lions had been receiving care since 2017 by the Columbus Zoo team in a custom-built interim home at a facility in Florida until it was time for them to come to Ohio.

A thorough, carefully-coordinated plan was implemented to ensure that the sea lions’ and seals’ move from Florida to the Columbus Zoo went smoothly. Designated stops were made along the way to check on the animals, travel occurred during the lowest traffic times, and several other facilities accredited by the Association of Zoos and Aquariums (AZA) were on call to provide assistance, if needed, throughout the route. The Zoo’s team of experts noted that all of the animals traveled well in their temperature-controlled, custom-built crates and they remained calm, with many of them even periodically sleeping.

“The arrival of the sea lions and seals is extremely exciting. Months of positive reinforcement training helped prepare them for their move, and they are adjusting smoothly to their new surroundings. Not only do they continue to do very well as a strong social group, but they also share an incredibly close bond with their care team, who cared for them in Florida and who moved with them to Columbus. We remain committed to providing these amazing animals with top quality care, and we are looking forward to opportunities to continue inspiring our guests in a multitude of ways so we can all join in efforts to help make a difference for these species’ ocean homes, even from right here in Central Ohio,” said Suzi Rapp, the Zoo’s Vice President of Animal Programs.

Additionally, Adventure Cove will further the Zoo’s commitment to sea lion rehabilitation initiatives led by institutions accredited by AZA. The Columbus Zoo has provided financial support for years for rescue and rehabilitation efforts by the Marine Mammal Center (MMC) in Sausalito, Calif., and three of the Zoo’s veterinarians have each spent a month aiding the MMC with the stranded and injured marine mammals it works to nurse back to health while expanding their knowledge of sea lions and seals.

Although California sea lions are not listed as a species of concern, the situation for wild sea lions is increasingly dire because there are a rising number of pup strandings. As climate change forces the mothers to hunt further away from shore, more of them are not coming back, leaving pups orphaned and unable to care for themselves. The MMC takes in many of these animals and works to restore them to health.

There are plans for the Columbus Zoo to provide a home for at least one rescued animal in the future and we are working with the National Marine Fisheries Services (NMFS) and the AZA Species Survival Plan® (SSP) to provide permanent homes for non-releasable rehabilitated animals from our partners such as the MMC. Adopting a rehab animal is the next logical step for the Columbus Zoo in strengthening collective efforts of AZA-accredited facilities in North America to care for wild sea lions found injured or stranded.