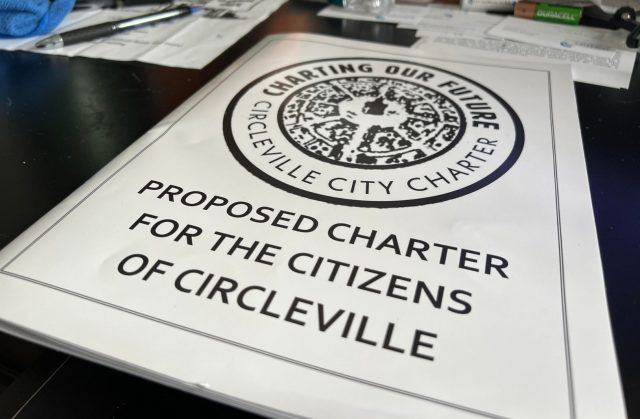 Circleville – The Circleville city mayor has requested that the City Council remove the Charter that is up for a vote on August 2 from the ballot.

Accoridng to the Circleville City Mayor Don Mcllroy he has received several complaints on the document that has been sent to the voting citizens of the city. A document that the city used 18,000 dollars of approved funds to provide.

“The document that was sent to the registered voters of this city does not only contain the charter that was passed by the council but a promotion campaign from a PAC. It gives me no pleasure in requesting that the city council by ordinance remove the Charter from the Ballot.”

A PAC is a political action group that pools campaign contribution funds from members and uses those funds to campaign for the passing of a law, ordinance, candidates, etc.

A pact was formed to promote the passing of the charter called, “Charting our future” signs locally that say, “vote yes for Charter,” have language on them according to the law that says, “paid for by Charting our Future,” but several pages of a document sent to voters contain language from the PAC that promotes that campaign possibly swaying the election using taxpayers money. The mayor told Sciotopost that the first 8 pages of the document sent to voters were not approved by the city council and the front and back cover has, “Charting our Future” the PAC campaign name.

This week the Long Range Strategic Planning was planning an information session regarding the proposed Charter Tuesday at 6 pm in City Council chambers for people to openly discuss the city charter was canceled abruptly after City Attorney Gary Kenworthy told the city that a public information meeting for the charter could not be held in a city building. That meeting has yet to be rescheduled.

The charter along with statewide primaries is already being voted on with early voting, for the Aug 2 special election.

The citizens on the charter commission decide how to distribute power among elected officials and bodies and between the city officials and the citizens.  Compared with the statutory government we have now, a charter would be more responsive to our local needs. The people who live here would decide what works best for our city.  And a charter can be revised at any time.  More than 75% of Ohio cities have adopted Charters.