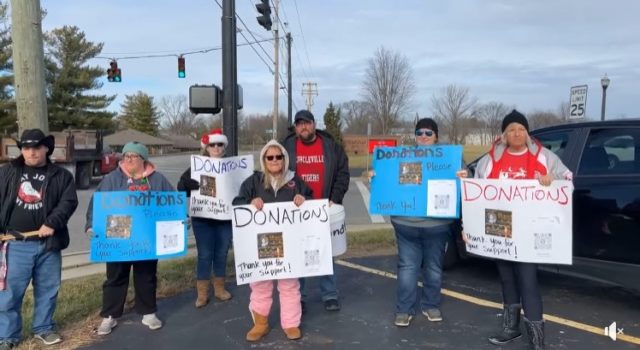 Circleville – Johnathan Lee Cassady was a 5-year-old boy who was described as full of life, fell ill last weekend when he succumbed to an unknown sugar issue and a complex sickness. He passed away at Nationwide Hospital, what happened next may be a Christmas Miracle.

Local Circleville Bus drivers banded together and decided to help a family in need, one that could possibly not have the funds to take care of funeral expenses in the near future. They decided to start a donation drive, one that would go directly toward funeral home expenses.

On Monday, December 19th local bus drivers started donations at the bus garage people could contribute whatever they could to help. On the second day with their first holiday day off, they gave up their time and stood at the intersection of Clark and Nicholas Drive with buckets and signs asking for any donation of any kind to help.

The first day was successful around 2,000 dollars were collected but the goal was around 4,000 so they planned for a long day at the intersection the next day. By that time word had gotten around about the charity and more monies started to pour in. By noon they had reached a minimum goal of 4,000, but that was just for basic needs so they gave one more push to make sure that Johnathan Cassady was given a good funeral at the cost of 6,000 dollars. By the end of the day, they were just slightly short of that goal at 5,800 dollars.

The bus drivers told me on the scene that Johnathan was one of the sweetest boys they had met, most of them in tears talking about how they will miss his smiling face when they stopped to pick him up on their bus route, and when he blew kisses to the drivers when they left.

Arrangements for the funeral are in the works