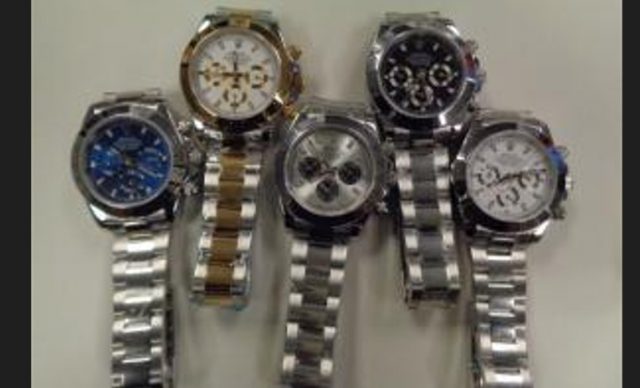 The first shipment originated from Hong Kong, and was destined to a private residence in Richmond, Virginia. Although it had a declared value of $319, the package held 275 assorted Cartier Love bracelets. Had the 275 bracelets been genuine, the Manufacturer’s Suggested Retail Price (MSRP) would have been $3.27 million.

“These large seizures illustrate the work our officers do every day to protect our country, its citizens, and the economy,” said LaFonda D. Sutton-Burke, Director, Field Operations-Chicago Field Office. “Our officers are dedicated to preventing counterfeiters from defrauding consumers and legitimate businesses.”

On Saturday, August 5, CBP officers seized another shipment from Hong Kong containing 13 fake Rolex watches- 10 Cosmograph Daytona and three Yacht Master II. These counterfeit watches were heading to a business in Mesquite, Texas. Had these been genuine, the MSRP for these watches would have been over $405,000.

“CBP is responsible for enforcing nearly 500 U.S. trade laws and regulations on behalf of 49 other federal agencies.  CBP officers play a critical role in the Nation’s efforts to keep unsafe counterfeit and pirated goods from harming the American public,” said Richard Gillespie, Port Director – Cincinnati.  “This is yet another dramatic example of how CBP officers work every day to protect the American consumer, the US economy and US jobs.”