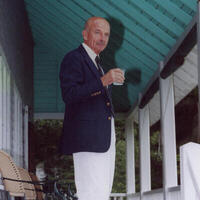 He was born October 6, 1928 in Boston, Massachusetts. He graduated from Tufts University and was a Navy Veteran, having served aboard the U.S.S. Worcester during the Korean conflict. Conrad was a contractor by trade, who served on the planning variance board in Boothbay Harbor for many years and owned a frozen foods company in the Dominican Republic. Conrad knew how to work hard and play hard. Whether at his house in Spain, or trips to Italy, Costa Rica, or sailing on his boat, the “Maine Squeeze”, in the Virgin Islands. He was always ready for an adventure and quick with a joke to make everyone smile. He will probably be best remembered by those who loved him basking in the sun, windsurfing, sailing his boat, clamming the mud flats at low tide, or sitting on his beautiful porch with a rum and coke watching the sun set.

A private memorial is being planned for a later date.  In lieu of flowers, donations may be made to the Boothbay Region Land Trust in his memory.