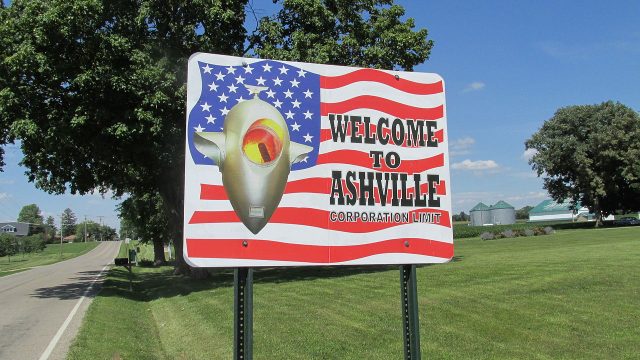 ASHVILLE – Ashvilles Mayor Charles Wise says after medical leave he’s ready to come back to the office and get back to work.

“I’m anxious to get back to work if this is your retirement, I’m not interested,” said Wise after an Ashville council meeting where he sat in the audience instead of his seat.

Wise who has held the mayor position since 2001 and has been with the Village for 40, says that the first order of business when he comes back is to hire a very close assistant, to the village administrator.

“The village administrator has so much on his plate with all this development in Ashville. So hopefully, this person could take some duties and run with it. We have several things here we’d like to accomplish like having the basketball court resurfaced and maybe putting in a couple of pickleball courts in, we would really like to put a splash pad somewhere. We talk about it, and we talk about it, but counsel and I are part time, we have other jobs, and we really can’t expect the administrator to concentrate on those items when we have more important things going on. So hopefully, this person with an enhanced capability can help fill that gap. So that’s, that’s my number one priority.“

The Mayor said during his medical leave he has been able to spend time with his grandson.

“I have enjoyed the time off because I have a seven-month-old grant grandson, my first grandchild. So it’s given me the opportunity to go over during the daytime, and spend some time with him, which has been terrific. I will miss that going back to work, maybe that’s what retirement is I don’t know.

Mayor Wise says he’s looking forward to getting out into the town and meeting people at the festivals coming up, he asks for people to come talk about some of the big projects that have been proposed in the town.

“I always encourage people to do that when they Facebook me or contact me that way, you know, come in and talk to me. I mean, I love talking about Ashville, come to the council meeting, you know, tonight’s council meeting, there were two people sitting here, besides those that are participating in the meeting, sometimes it’s hard to blame counsel when something is not going the way you like it because they’re elected to represent people. Without any input, they think that they’re doing and I think that I’m doing what people want. You know, it’s one thing to make a post on Facebook, that you’re unhappy with something, it’s another thing to talk to a council member or myself, to be able to try to take care of what that issue is. That’s probably the big one of the biggest things I’m disappointed about with the job is, I think that if you live somewhere, you should be engaged, we have our newsletter goes out, we have our website, sometimes we give news stuff, but I think your civic duty also is to at least be engaged enough to know what’s going on. You know, if you don’t know what’s going on in and you don’t care, unless it’s something that affects you. I mean, it’s really hard to have a voice after the fact, and that’s normally what happens.“

The Mayor said he’s excited for the Viking Festival, 4th of July, and Food Truck Festival coming up

“I think is kind of a unique thing. It is kind of different from the Fourth of July Festival and the fact that there’s a quicker turnover of visitors. You know, like the townspeople people may go out for a couple of hours and they’re gone. But we have people from several states that come to it. We’ve had one gentleman come several times from Texas. So it’s not just a local thing, people from all over come to it. So that’s kind of surprising but you may go out there and there may be 1000 people on the grounds at one time, but if you’d actually count the turnover of people and the nice thing about it, they don’t charge admission for anything. They ask for a donation for the food pantry so they have a little tent at the entrance. We don’t charge them for the park, any group that is doing any kind of civic event. We don’t charge for use, Boy Scouts and the Girl Scouts and those groups. We do rent for the shelter house because we have utilities and that to cover that.

The museum puts on the food truck festival, and, there are things to do here in town, we try to allow and encourage activities. It’s just hard for me to take tax money and put on an event for the citizens because, that tax money is for everybody, and you put on an event that can be only been for a few. So that’s kind of hard, we do use some funds that we have set aside for fun in the sun for the kids program during the summer, I think we have six of those, and then we normally have two or three movie nights late summer, which is kind of fun we put on, but we try to have things for the community.“

The Mayor said that the long term plan they created in 1985 and have updated periodically has always called for most of the land along the US-23 corridor to be commercial land when he was asked about the possible DHL project that is proposed.

“Most commercial is going to build in the 23 corridors. Most of what we are going to have is residential. I mean, we will have some retail mix in, but will be mostly residential, it’s just a fact that we’re relocated. But we’ve always protected that corridor out there. We’ve had some proposals for a residential, mixed residential, industrial area, but we’ve never been really receptive to that it is really like the only land that we have that we can develop in a commercial capacity, and you really need that in a community to be balanced financially. If they have 2000 employees, and other than the ones that come from town to work there. Those are all people that are going to be paying income tax to the village that other than coming into work and leaving and we don’t have to provide services for and that’s what’s so important about the commercial part. Commerical areas pay their parts for the infrastructure of the city so that there is less impact on the homeowners. I live in this village. I’ve lived in this village for 40 years and every decision that Council makes, or I make affects me too.”