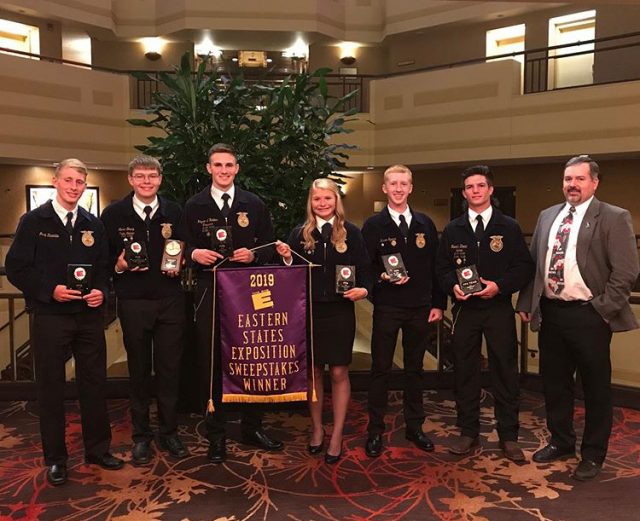 The Big E — September 13-15, 2019 proved to be a hugely successful weekend for the Amanda-Clearcreek FFA at the Eastern Regional (Big E) Career Development Event contesst in West Springfield, Massachusetts.

Aaron Sharp, senior, placed first in the Extemporaneous Public Speaking CDE. This contest requires participants to use a randomly chosen topic from a pool of 125 possible topics. Then, contestants must research the topic for 30 minutes, and deliver a 3-5 minute speech in front of a panel of judges. Sharp will next compete at the National FFA Convention this fall in Indianapolis, Indiana, on behalf of his chapter at the state of Ohio.

Morgan Anderson, junior, placed second in the Employment Skills CDE. Anderson had to assume the many tasks of a job-seeker and write a resume with a cover letter and references. She also had to schedule an interview, complete a networking activity, participate in a 20-minute interview, in addition to filling out the job application and follow-up thank you letter.

Not only did these members represent the A-C FFA Chapter, but they also represented Ohio FFA. There were FFA members from twelve different states at this contest, marking quite an accomplishment for A-C FFA members. Congratulations to these A-C FFA members, and an outstanding finish to all of their hard work!