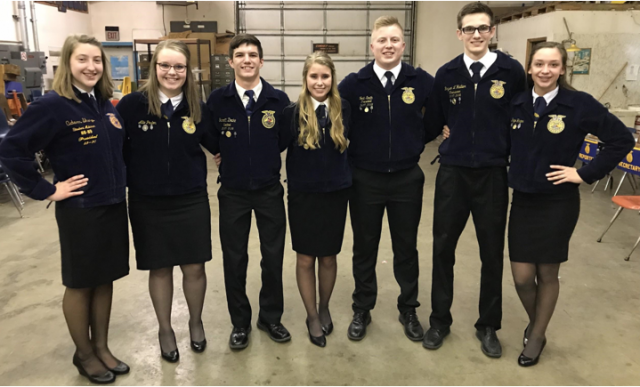 This contest requires a 15-minute presentation followed by a seven-minute question and answer session, a 10-page written portfolio, and the completion of a minimum of five presentation forums. The A-C FFA Ag Issues Forum CDE team not only met these standards, but exceeded them by completing a total of 27 forums, including presenting to State Senator Tim Schaffer, State Representative Ron Hood, and staff of the Ohio Farm Bureau, to name a few.

This year, the team’s topic was lab-grown meat and its impact on the agricultural industry as a whole. Lab-grown meat is grown through stem cells that have been cultured in a lab via fetal bovine serum. As part of their presentation, the team explained the pros and cons of their topic from many different standpoints and perspectives. These forums ultimately help students to develop critical thinking, problem solving, and formal communication skills.

“All of the hard work, forums, and studying finally paid off,” said Morgan Anderson, a sophomore. “I cannot believe we did it!”

This is the 10th year this contest has been offered as a CDE in Ohio, and the A-C FFA Chapter has either won the contest or earned a top-five placing every year since its inception. This year is the sixth time the A-C FFA Chapter has won this CDE at the state level. Congratulations to this team for upholding the winning traditions of the chapter, and good luck to the team as they compete at the national contest!