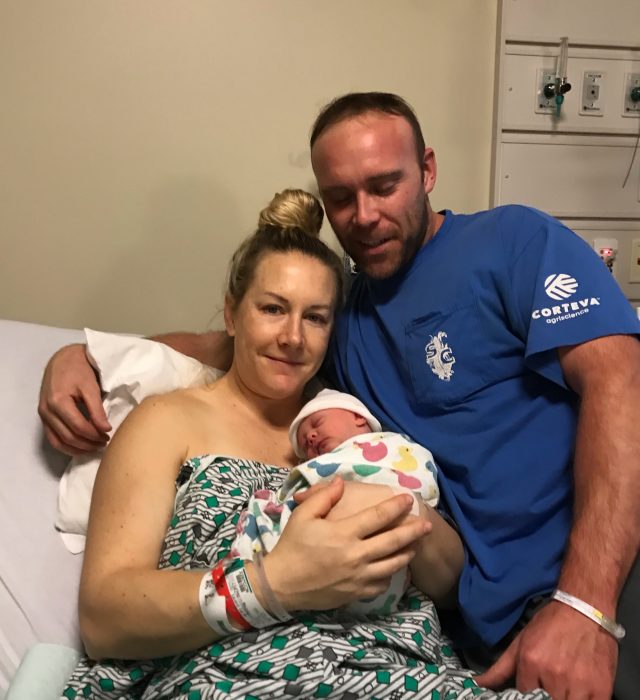 CHILLICOTHE, OH (Jan. 2, 2022) – Lacey Lyle and her husband, Jared, weren’t taking any chances when it came to preparing for the birth of their first child, who was due to arrive January 22.

“I am a planner, so my husband and I made sure we had everything ready before the new year so we were pretty much set to go, thank goodness,” Lacey said. “Otherwise, I probably would have been having a stroke right now.”

Lacey avoided that stroke she joked about, but she and Jared did become the proud parents of the first baby born at Adena Regional Medical Center in 2022. At 7:33 a.m. Sunday, January 2, they welcomed the arrival of their daughter, Evey Jo Lyle, who entered the world at 5 pounds, 10 ounces and 18 ½ inches long. Evey is their first child.

“I was having contractions early this morning so I hopped in the shower and I just figured they were those fake Braxton-Hicks contractions, but then they started to get more intense,” Lacey said. “My husband was fixing us breakfast and my water broke. We headed in to the hospital and they checked to see if she was breech and she was so they did an emergency C-section to get her out of there.”

In a breech situation, the baby is not in the correct position within the uterus for a regular head-first vaginal birth. Because of the extra risk that can pose to the mother and the baby, a cesarean – or C-section – procedure is often performed to allow for the safest possible birth.

Both mother and daughter were doing fine Sunday afternoon. Lacey said she was appreciative of the quality of care they received and of the fact that “everybody was really nice” in providing that care.

Lacey is originally from Circleville, while her husband is from Greenfield. The couple now lives in Kinnikinnick.

As it does each year, the Adena Women’s Board will provide a gift basket for the first baby of the new year, born as the result of spontaneous labor/birth (not induced or scheduled).